When our students need us, WEA educators show up in numbers.  This election, WEA members were doorbelling, texting, and rallying across the state to support the candidates who will have our backs and our students’ backs. We want to be sure everyone gets their ballots in before tomorrow’s 11/8 8pm deadline!

So much is on the line in this election.  Our students’ academic and mental health needs are more urgent than we’ve seen in a generation and we need lawmakers who share our vision of meeting those needs with well-staffed, well-funded public schools.  We’re taking action to ensure we elect candidates that support public education and working families.

“Having Kristine Reeves, Senator Patty Murray, and a crowd of community members including children, in our WEA HQ for a conversation about education, childcare and an economy that works for all families was very meaningful,” commented Shannon McCann, president of Federal Way EA. “They both were completely comfortable and engaging, and welcomed the kids who continued to crawl/walk up to them when they were speaking! Let’s continue to have conversations like this, and make politics more relatable.”

Get out the vote work has happened all over the state.  Leaders from WEA Fourth Corner joined WEA President Larry Delaney in the 10th legislative district for get out the vote doorbelling.

“At this point in the campaign, every voter we talk to and remind to get their ballot in is a win,” said Cam Munro, WEA Fourth Corner President.  “What we’re doing makes a difference for our schools.”

At the same time, members of WEA Olympic counsel gathered on the peninsula in support of Senator Emily Randall and House candidate Adison Richards in the 26th legislative district.  Members also gathered in Federal Way’s 30th legislative district to support Senator Claire Wilson, Rep. Jamila Taylor, and Kristine Reeves with a rally and doorbelling fellow union members in the district.

In Issaquah, WEA Sammamish members had lunch with U.S. Representative Kim Schrier and state Representatives Bill Ramos and Lisa Callan before heading out to visit with voters in support of their campaigns.

“We are at a critical moment in our state and in our nation. Sitting on the sidelines just wasn’t an option,” said Jamie Mercer, vice president of Tahoma EA and middle school Special Education teacher. “We need pro-education, pro-union candidates like Lisa Callan, Bill Ramos, and Dr. Kim Schrier in office. It was a privilege to knock on doors with my young daughter and encourage my neighbors to get out and vote!”

All across the state, WEA members have been texting both members and voters to remind everyone to turn in their ballots.

Make sure you’ve turned in your ballot! 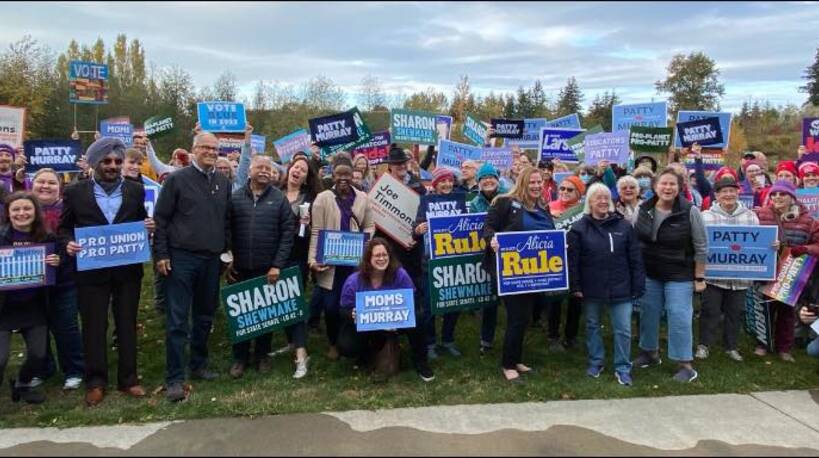 Posted in: Elections
Back to Blog