A chat with the new schools chief 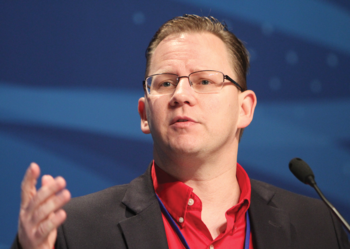 The following is an interview taken from the fall issue of WE 2.0.

Chris Reykdal is Washington’s next state superintendent of public instruction. Reykdal, a state House member from Tumwater and former teacher, was endorsed by a broad coalition of unions, including WEA-PAC. As Reykdal prepares for the transition to his new role, he took time to chat with WEA and to reach out to WEA members.

Q: Now that you have won the election, what are your plans to reach out to constituents who voted for your opponent?

A: The first major effort is to build a cabinet that reflects the priorities of the campaign. Fortunately, in this race for OSPI my opponent and I shared several priorities — amply funding our public schools, addressing our excessive testing system, closing opportunity gaps, supporting our educators, and so many other critical elements that lead to student success. As we build a more diverse cabinet, we will simultaneously be faced with the most critical legislative session for education in our state’s history. It will be imperative that we build feedback processes that engage stakeholders and constituents across the state. We don’t mean just tours (which we will do), but also more real-time opportunities to give immediate feedback on policy and budget considerations of the Legislature.

Q: What are your top priorities for your first year as state schools superintendent?

A: My top priorities in my first year as Superintendent of Public Schools are, first, to work with the Legislature and the Governor’s Office to get our schools fully and amply funded. My next priority is to bring a more rational approach to our excessive testing system. Third, we must get our public education system re-committed to career and technical education, which will provide our students more pathways to graduation and raise our graduation rates. Fourth, I will fight every step of the way to ensure our local school districts maintain the ability and authority to make decisions for their districts — this is even more critical given the new Secretary of the U.S. Department of Education appears to have a massive privatization agenda. Finally, OSPI as an organization is loaded with talent, but there is a need to focus that talent and energy on strategic initiatives and better ways to evaluate our success. There will be an emphasis on evaluation of the effectiveness of the organization and the major units that operate at OSPI.

Q: How will you try to help our legislative houses understand how unfunded mandates impact students, educators and their families?

A: There are two parts to an unfunded mandate — the mandate part, should something be required? and the funding part; even if it should be mandated, is it accompanied by the right level of resources? Our team will engage education leaders to better understand what things need more resources and what needs to simply go away. Every mandate has a constituency behind it that got the mandate put in place. This work is difficult, but may have new importance as we move closer to fully and amply funding the system.

Q: Where do you think we are headed in terms of standardized testing requirements?

A: The testing regime in our state, much like other states, has deep roots in the last two presidential administrations. Now we see the new Trump team trying to reconcile his campaign theme of more state control with a USDOE Secretary who has a long history of privatizing education through political influence and very wealthy influential power brokers in Michigan and in other states around the country. Will they insist on standardized testing? Can they square that with campaign Trump who swore to eliminate the Common Core and return standards and practices back to the states? The apparent election of Donald Trump complicates the political landscape around standards, testing, and states’ rights.

If we can successfully maintain state control, my efforts will include a reduction in standardized testing, and especially the need to eliminate passing a standardized test as a graduation requirement. Meaningful assessments that impact student achievement and progress should be written and graded by a child’s teacher. This gives more control back to individual school districts and educators. Under almost any scenario however, we will still need to administer some standardized tests, but it’s time to put those results in proper context and application — evaluation of state and district progress — not as a punitive tool aimed at students and teachers. There is bipartisan momentum for this effort — it’s time to make this the state’s core assessment policy.

Q: Have you been watching the OSPI ESSA process, and do you have thoughts or comments about what you like or might want to change?

A: OSPI staff and stakeholders across the state have been working hard for the last 10 months on getting our state’s ESSA Consolidated Plan ready to submit to the U.S. Department of Education. Several stakeholder groups want additional time for feedback and changes. Given the massive shift in Washington D.C. and at OSPI, the current Superintendent and I are working on efforts to delay the submission to provide for more feedback and for me to possibly recast the document with some of my expectations, especially considering the new Secretary of Education. Our state will need to be a leader nationally in demanding state and local control and maximum flexibility. I need to take the necessary time to ensure that the accountability plan is robust and effective but not overly prescriptive to Washington D.C. The last thing we want is a plan that hands over more control to a federal administration with very little understanding of public education – and virtually no sensitivity to the unique interests of the State of Washington. The ESSA was written to empower states while still holding systems accountable to state leaders, parents, and students. We will not submit the plan until it makes progress on those major objectives.

Q: What do you think is the largest misconception about public education today? What role should OSPI play to change that misconception?

A: In a plug and play world, too often the critical role that educators and school support staff play in a child’s life are not recognized. Teaching and learning is most effective in a caring environment where the whole child’s needs can be met. Our educators and support staff play an incredibly important role in partnership with parents in introducing our children to the world and how they should function in it. Our children learn not just academics at school, but they also learn social/emotional skills, and valuable lessons that they will carry with them throughout the rest of their lives. Today however, too many people falsely believe that public education should be more commoditized and monetized to make profit at every step, to “lean it out” by removing the very high-touch interactions that positively shape a child’s life forever. OSPI can actively work to change this misconception first by working with policy makers to give our educators more freedom to do what they are trained to do: educate! We can and will innovate. We can and will integrate better technologies, more data, and more applications, but none of that should be aimed at reducing the very human activity of teaching, coaching, mentoring, and supporting. My job at OSPI is to get educators the policy and budget resources they need to create greater student achievement. When we put quality teaching and learning ahead of economic philosophies like privatization, commoditization, “choice,” and other for-profit code words, we can make progress in building a system that is both student-centric AND accepting of innovation. I’m looking forward to this conversation over the next four years!